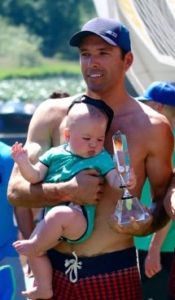 Billy Allen is a top AVP Pro Beach Volleyball Player who finished ranked number one in points and number one in digs for the 2017 season. He has two open wins, AVP Seattle in 2016 and 2017, and also competes internationally for Team USA. Billy played college volleyball at Cal State Northridge and has over ten years experience coaching at the collegiate, high school, and club levels. Billy grew up playing beach volleyball in San Diego and loves sharing his passion for the game. He is married to fellow AVP player Janelle Allen and they have a 2-year-old future volleyball star named Ketch. When he’s not playing or coaching, Billy hosts a volleyball coaching podcast called Coach Your Brains Out.