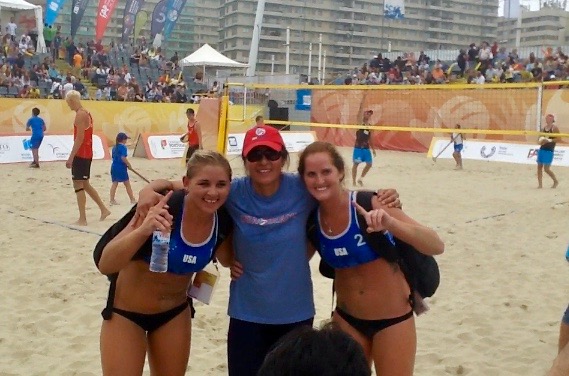 It was a summer to remember for the All-American duo of Brittany Tiegs and Jace Pardon after they claimed the gold medal at the 2014 World University Beach Volleyball Championship in Porto, Portugal.

The pair finished the tournament with an 8-2 record and clinched the gold medal after defeating Germany’s top team of Kim Behrens and Sandra Seyfferth, 21-18, 21-12. They cruised to victory after two hard-fought three-set victories in the quarter and semifinals.

“We were able to get through a lot of pressure situations between the three-set matches in the quarter and semifinals, so we were prepared for the pressure of the finals,” Pardon said. “All I was thinking on match point was ‘this is it, this is it!’ I wanted to cry but I tried to keep calm and not get ahead of myself and get the job done.”

“It was such a huge accomplishment for us both,” Tiegs added. “We were both proud to represent our country and bring home the gold.”

Tiegs (Stuart, Fla.) and Pardon (Manhattan Beach, Calif.) were coached by Beach Volleyball Hall of Fame member, Patty Dodd (Bogota, Colombia), at the World University Championships. Dodd credits the duo for battling their way through the bracket and proving why they deserved the gold medal.

“Our gold medal meant that Brittany and Jace proved themselves as one of the best pairs in the world,” Dodd said. “The level of competition was very high and we had to battle through the bracket, there were no easy matches. They made our country very proud.”

Pardon and Tiegs were teammates at Florida State in 2012, the inaugural year of collegiate sand volleyball for the Seminoles, until Tiegs transferred to the University of Hawaii to complete her student-athlete career.

“We have always been close friends,” Pardon said. “When we were at Florida State together, even though we were teammates, we had to play against each other all the time in pairs tournaments.”

Although the two never got to play together as pairs, their chemistry advanced the duo to the finals of the World University Championships.

“It’s definitely better to be on her side of the net,” Tiegs said. “She’s a great player and easy to play with so it was really fun. We were always good friends while I was at FSU, so it was awesome to finally play with her since we never got a chance to.”

Dodd only had a few weeks to coach Tiegs and Pardon but says their commitment in the off season is what made them so successful in the championships.

“Brittany and Jace play a fast pace game, at times too fast,” Dodd said. “We learned to not rush, reset off defense and to play with poise and composure. There were easy to coach and put in a lot of extra hours playing in many tournaments in California in order to prepare for the World University games.”

In the beginning of May, Pardon partnered up with Lara Dykstra (Redondo Beach, Calif.), a two-time AVCA Sand Volleyball All-American at Pepperdine, to compete in the FIVB Beach Volleyball U23 World Championships where the duo took home the silver medal. Following the second-place finish, Pardon was left with a chip on her shoulder.

“I was so devastated after we lost the final,” Pardon said. “I didn’t want another second place so when I got another chance to win gold, I wasn’t going to lose. I knew what it felt like to be so close and there was no way it was going to happen again.”

Tiegs, an AVCA All-American, went 38-6 with partner Karissa Cook (Santa Cruz, Calif.) in 2014 when the pair finished runner-up at the AVCA Pairs National Championships. She is hoping to carry through her success in the summer in her final year as a Rainbow Warrior.

“I’m ready to finally get my degree,” Tiegs said. “I’m excited to be back in Hawaii for another year with the great friends that I’ve made and explore the island more.”