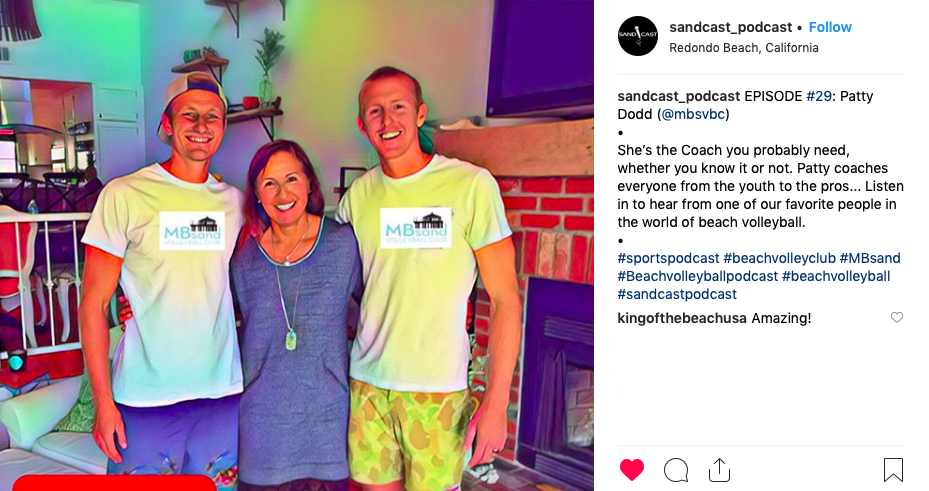 Coach Patty was interviewed over Memorial Day weekend for the Sandcast: Beach Volleyball with Tri Bourne and Travis Mewhirter Podcast. The interview touches on several topics such as the grass roots movement to get more boys involved in beach volleyball, coaching the men’s national team and some fun stories about Patty’s early days in the US, including her introduction to Hot Dog on a Stick and so much more!  We hope you enjoy and if you are inclined, please follow their podcast.

Patricia Orozco knew Mike Dodd was serious the day he picked her up at UCLA in 1985. She knew he was serious because, after taking her to Marine Street for a crash course in beach volleyball, he took her to The Kettle for lunch in Manhattan Beach. “And it was like ‘Whoa!’ If you get taken to The Kettle for lunch then he’s serious,” she said on SANDCAST: Beach Volleyball with Tri Bourne and Travis Mewhirter. Serious enough that, a year later, they wed, and Patty took Dodd’s last name, and 33 years later they remain not only happily married, but business partners and elite coaches in the Manhattan Beach area where Patty began to learn the beach game. Well, Patty is at least an elite coach. Mike is technically, and hilariously, the equipment manager at MBsand Volleyball Club, and he takes his job seriously enough that when Patty couldn’t make it one day, one of the 12-year-olds commented that MBsand must be running terribly low on coaches because the equipment guy had to fill in. She had no idea the equipment guy was a five-time Manhattan Beach Open champion and Olympic silver medalist. “The mom just could not wait to call me, because she knows Mike’s background,” Patty said, laughing. “That’s what 12-year-olds can say. The janitor is going to run practice.” Some janitor. And some janitor’s wife, too. Let’s, for a moment, put their prolific playing careers aside – and indeed they were prolific – and examine only their coaching backgrounds. When Patty graduated from UCLA, she took up an assistant opening with the Bruins indoor team. They won a national championship in the very first year. “I knew early on that I wanted to do this,” she said. “I just fell into being a graduate assistant in my fifth year and we won NCAA and it’s like ‘Oh, yeah, alright, I like this. I really like this.’ I was so young at the time, but the fact that what you said had an effect on the player or the play or the outcome, I was hooked. “It just took me a while to get to the coaching part because I was doing my playing part.” And she did her playing part well. A native of Bogota, Colombia, Dodd graduated from high school in 1980 and moved to Santa Fe Springs, where she could learn English and play volleyball for a local club team. Within those six months she had offers to play for UCLA, Hawaii, USC and Oregon. “I remember when I first saw her at a Christmas tournament,” then-UCLA women’s volleyball Coach Andy Banachowski, who has led his teams to four national championships, told the Los Angeles Times. “I was looking down in the Sports Arena and I saw this girl move incredibly well. What really caught my attention is that I didn’t know who she was because I know all the kids in the area with talent.” “When Andy came up to me,” Orozco told the Times, “I couldn’t even understand him. I was even named all-tournament and didn’t even know what that meant.” The accolades, she’d soon become quite familiar with, setting UCLA single-season kills (627), single-match kills (33) and single-match digs (30). As a senior in 1983, she led the Bruins in kills with 403. She still had yet to step foot on a beach. She finished her grad year at UCLA and competed for a year in Italy, where she initially met Dodd. Who better to teach her the beach game, then, but the man she met in Italy who was in the midst of winning four consecutive Manhattan Beach Opens? Yes, the janitor can coach, too. She proved a quick learner, too, Patty. By 1989, just four years after Mike took her to Marine Street and provided the Beach Volleyball 101 crash course, Patty, partnered with Jackie Silva, won 11 of 13 tournaments. Four times that year, Patty and Mike won tournaments on the same weekend, becoming the first married couple to do so. By the time they finished competing, with six total Manhattan Beach Opens to the family name, the Dodd